You ever join a bunch of folks carrying something heavy, like a piano or an over-sized entertainment center or a monster gun safe? Do you wonder what would happen if you just stepped away? Would others notice the extra weight when you took your hands off?

Thanks to Aaron Armstrong, I read this incredible quote from the great 19th century believer George Mueller.

The godly aim of our lives should be that when we die we may be missed. My soul longs for grace so to live, so to walk, so to act, that when my course is finished, I may be missed,—I may be greatly missed. It becomes every one in the body of Christ,—every member in the body of Christ, to aim after this; that when their course is finished they may be missed,—they may be missed.… Suppose this were my last night on earth, suppose I should not have to stay another day here, would my brethren and sisters in Christ miss me? How deeply important it is that we should so walk, so act, and so pass through this world, that when we are gone we may be missed. If when gone, we are not missed by the saints, it is a plain proof that we have not been strengthening their hands in God, it is a plain proof that we have not been ministering to their spiritual profit, that we have not been helping them forward in the things of God. If we take our place,—though we may not be preachers, though we may not be pastors, though we may not be holding any public position among the saints,—yet if we take our place as members in the body of Christ, and act according to the place the Lord has given us, and walk graciously according to that place, when we are gone we shall be missed,—we must be missed. After this we all have to aim. Let each one take away with us to-night this godly purpose,—that by the grace of God, from this evening and henceforth, it shall be my earnest prayer, my constant aim, so to live, so to walk, so to carry myself, that when I am gone I shall be missed.

We should be living now so we will be missed when we take our hand off the load. Look for someplace to pick up some weight today.

This past Sunday I preached about Judas’ regret and what that means to us.

After the service someone asked me if Judas could have changed his mind. That is a deep question. God orchestrated all the events leading to the cross. But every individual has freedom to choose. Not even Judas was born destined for inescapable judgment.

So could Judas change his mind? Yes…and no. By the time he is dealing with the chief priests, it is quite possible that he was past the point of no return. Satan had already entered into him. He may have felt he could still turn around, but he may well have already been handed over to destruction.

Just today I received word that a very prominent pastor in another state, a man I held in high esteem, abruptly resigned yesterday after admitting a moral failure. Most likely he misjudged the point of no return. Whatever his moral failure was, he probably felt he could always turn around at the next intersection. Certainly he planned to, but before he knew it was too late.

This is a certified attribute of inappropriate relationships. But that is not the only realm this applies. Many a former church attender began by simply missing church a little extra during a particularly busy season of life. They planned to turn back around in just a few weeks. For others, it is stretching the truth a bit to reduce some impending pressure or gain an extra edge. Now whole sections of their life are built on deception. The examples are endless. A couple extra drinks, a peek, an accounting loophole, a bitter thought housed a little too long.

Learn a lesson from Judas. Now is the time to back it up. This is the point of return. In this moment, while the Spirit of God convicts, repent and return. 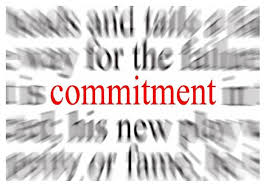 We live in an age where commitment has become based on convenience. We have all experienced someone who has told us “I am going to be there” only to leave us waiting!

But God desires so much more for our lives. He declared that we are only to commit ourselves to Him. In Exodus 20:3 God says “You shall have no other gods before me.” He says should put Him first in our lives and trust that He is worthy of our commitment.

There is benefit to commitment otherwise why would we commit to anything. We pursue things because we believe it will benefit us in some way. King David knew where to place his commitment.  In Psalms 37:5 he says, “Commit your ways to the Lord; trust in him, and he will act.” The more we commit to God the more He moves in our lives. He begins to transform us and lead us.  His own son Solomon echoed similar words. In Proverbs 16:3 he said, “Commit your walk to the Lord, and your plans will be established. The funny thing is that our plans begin to look more like His plans as we become committed to His ways for our lives.

Join me in a simple challenge! Commit to giving Him one place in your life, where you have not committed to Him and let’s see what He does with our Commitment.

Where to Go From Here:

In case you missed it…